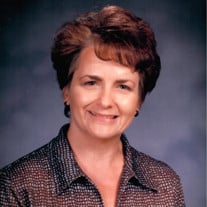 She was a member of St. James Catholic Church.

Karen grew up in Joliet, IL and was married to Charles in 1968, who passed away in 2001. Their son, Adrian was born in 1969. Karen received her BA at SIU-Edwardsville and completed her doctoral studies at St. Louis University. In 1978, the family moved into their 100-year old farm home; where they began training and raising racking horses. They managed and trained horses at Rehkemper Stables and owned, trained, and showed championship horses in (9) states. Karen had her Master of Science degrees in Spanish, French and Gifted Education. Karen was a World Languages Dept. Chair at Metro Academic and Classical Academy in St. Louis where she headed the Advanced College Credit Program and the National Honor Society. Karen hosted and enjoyed several exchange students. Karen was a travel agent at Travel One in Highland since 1984. They spent their free time traveling; visiting all seven continents. Karen taught water aerobics at the Korte Rec Center, participated at the St. Joseph’s Hospital Senior Renewal Program, and St. Paul Catholic Church’s Cursillo program.

Funeral Service will be at 9:00 AM on Thursday, September 16, 2021, at Spengel-Boulanger Funeral Home in Highland, IL.