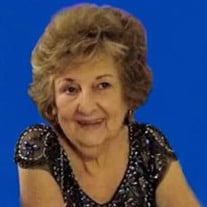 She was born on Saturday, January 13, 1940, in Highland, IL, the daughter of Oscar and Katherine (nee Schiefer) Hess.

She was a member of Salem United Church of Christ.

Katherine was born in Highland, IL and she was raised in Pocahontas, IL. After her marriage to Donald, they moved to Alhambra, IL. She was very friendly and never met a stranger. Her hobbies were playing Bingo, shopping, traveling, sewing, baking, making crafts and cooking for others. She was a great supporter for her family, especially her grandchildren and great-grandchildren.

Private Visitation will be held on Monday, September 20, 2021, at Salem United Church of Christ in Alhambra, IL.

Memorial contributions may be made to Salem United Church of Christ or Salem Cemetery.