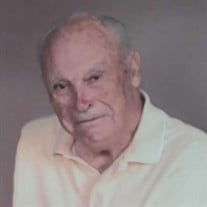 He was born on Wednesday, October 17, 1923, in Marshfield, MO, the son of Richard and Rebecca (nee Huskenson) Gentry.

He was a member of Salem United Church of Christ, Alhambra, IL, former Consistory Board Member at church; Helvetia Sharpshooters Society.

Born in Marshfield, IL; moved to Illinois in the late 1930’s, Pierron then Alhambra. Graduated from Highland High School in 1943. He worked at Klaustmeier Ford, Alhambra; then for many years at Gehrig Store, Alhambra, repairing and installing milking machines and electrical wash machines and retired in the mid 1980’s. While working at Gerhig’s store he operated a grain and livestock farm. He retired from farming in 1972. He enjoyed Saturday nights dancing at Lindendale Park, bowled in several leagues at High Top Bowl, fishing and hunting (he shot his first turkey in the mid 1980’s). He took many trips to Branson, MO. Eating at the Highland Diner and Maedge’s were very special. He was very active in his church; woodworking and mowing grass were his favorite activities.

Funeral Service will be at 11:00 AM on Friday, October 01, 2021, at Salem United Church of Christ in Alhambra, IL, with Rev. Jeremy R. Wood, Pastor, officiating.

Memorial contributions may be made to Salem United Church of Christ or Hitz Memorial Home.