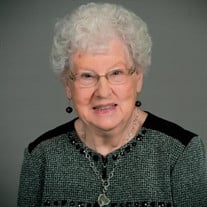 She was born on Saturday, July 23, 1927, in Saint Libory, IL, the daughter of Leo and Katherine (nee Sommers) Buescher.

She was a member of Saint Paul Catholic Church; Former Member – Daughters of Isabella; St. Anne Altar Society and the Moose Lodge.

She was born at St. Libory, IL and attended school there. She began working at St. Elizabeth Hospital, Belleville at age 17 years old as a Nurse’s Aid. After marraige she began working at St. Joseph Hospital, Highland, IL. She returned to school and became an Licensed Practical Nurse “LPN”. She worked 40 years at St. Joseph Hospital, Highland. She then worked at Dr. Heineman and Dr. Chaney’s office, later did Home Health Care and then she babysat grandchildren. Her and Rollie travelled the United States, including Alaska and the Caribbean. They enjoyed ballroom dancing every other weekend. She always attended her grandchildren’s sporting and musical events. She enjoyed following the St. Louis Cardinal Baseball team and playing cards with friends.