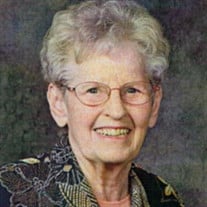 She was born on Wednesday, September 25, 1929, in Highland, IL, the daughter of Wilbert and Sylvia (nee Gathard) Rutz.

Mrs. Kamm was born on September 25, 1929 in Highland, IL, the daughter of Wilbert and Etta (Gathard) Rutz. Her father operated the Rutz Barber Shop. On May 30, 1949 in the Evangelical & Reformed Church, she married Edmund Beall Kamm, who passed away October 2, 2007. She and her husband were in the same class at Highland Community Schools, kindergarten through high school, graduating in 1947. She worked at Siegrist’s Style Shoppe until her marriage, and then was a homemaker until her children were all in school. In 1965, she went to work at Tschannen’s Ben Franklin, retiring in 1986. She enjoyed following the activities of her children and grandchildren, doing volunteer work, searching family trees and reading Highland History. She and her husband traveled to Switzerland several times looking up family history and also traveled around the U.S. on bus trips with friends. She was a wonderful seamstress and creative in all she did during her life.

Memorial contributions may be made to Evangelical United Church of Christ; Highland Home; Meals On Wheels or charity of the donor’s choice.