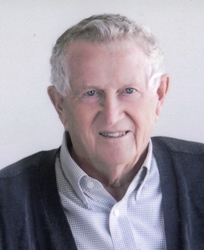 Charles F. VonderHaar, age 83 of Carlyle, passed away at his home on Tuesday, October 12, 2021, with his family by his side.

Charles was born April 13, 1938, in St. Rose, Illinois, son of August and Rose (Thole) VonderHaar. Charles grew up on the family farm east of St. Rose and attended St. Rose Grade School. He worked on the farm, Highland Box Company and as a truck driver for John and Helen Rehkemper prior to marriage.

Charles and Lorraine Varel were united in marriage on May 8, 1962, at St. Cecelia Catholic Church in Bartelso and started their life together on a dairy and grain farm north of Carlyle. They enjoyed 59 years together raising their family of seven children.

He was preceded in death by son Brian (in infancy), his parents, his mother and father-in-law Alois and Martha Varel, his siblings and their spouses: Vincent, Veronica (Gene) Beckmann, Leona (Alvin) Maue, Bertha (John) Fuhler, Bernard, Alphonse (Patricia), Mary Louise, Jeanne (Larry) Meyer, Francis, and Augie. Additionally, he was preceded in death by brother and sisters-in-law: Barb Varel, Jerry Ratermann and Tom Deerhake, and several nieces and nephews.

A Mass of Christian Burial will be held at 1:00 p.m. on Saturday, October 16. 2021 at St. Teresa Church, Marydale with Father George Mauck and Father Tom Killeen officiating, and Deacon Charles Litteken, assisting. Interment will follow in St. Mary’s Cemetery in Carlyle. Friends may call from 4 – 8 p.m. Friday at Zieren Funeral Home and from 11:30 – 1:00 at St. Teresa Catholic Church, Marydale.

Memorials may be made to St. Teresa Catholic Church, Marydale or Mater Dei Catholic High School. Online condolences can be shared with the family by visiting www.ZierenFuneralHome.com.