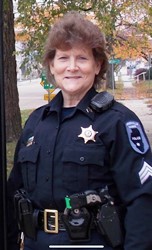 Deb started her law enforcement career in St. Elmo, Illinois. She was hired as Greenville’s first female Police Officer in 1990, and retired as a Police Sergeant after 30 years of service with the Greenville Police Department in 2020.

During her extensive career as a police officer, she served as a D.A.R.E. Officer, Field Training Officer, a Juvenile Officer, a member of the Professional Association of Diving Instructors Certified Open Water Diver. She was involved with the ChiPS Child Identification Program, Law Enforcement Special Olympics Torch Run, Muscular Dystrophy Association “Lock-Up” and the Greenville Police Association.

Deb enjoyed traveling and vacationing in Florida with her close friends. She loved being on the beach and developed an interest in marine life. Special trips with travel groups took her to Great Britain and the Holy Land.

Deborah and John William Keserauskis were united in marriage and later divorced. She is survived by two sons: Jason and wife Kelly of Beckemeyer, Illinois and Toby of rural Carlyle, Illinois. Loving grandmother to Abigail, Addilyn, Alyssa, Madison and Brynlee. Deb is also survived by her brother Richard Owen Barbee II and his wife Cathy.