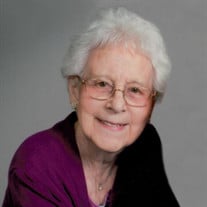 She was born on Wednesday, May 30, 1928, in Breese, IL, the daughter of Henry and Catherine (nee Raterman) Kues.

Mrs. Duncan was born at Breese, IL, graduated from St. Dominic’s High School, after graduation she worked as a bookkeeper for Southern Illinois Breeders Association (SIBA). Following their marriage she and John lived in Breese, Alhambra and Marine, eventually moved to Highland . She worked at Basler Electric in Highland for over 10 years. Florence enjoyed Cardinal Baseball, Gardening (Strawberries, Rhubarb, Grapes and Flowers), puzzles (Sudoku, Crosswords’, Word Search) and time with her children and grandchildren

Memorial contributions may be made to Heartland Hospice or Saint Paul School Education Foundation.