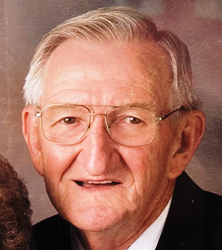 Max Dean Kaegy, age 86 of south of Greenville, passed away at 4:40 p.m. Sunday, October 10, 2021 with his family at his side. He peacefully passed away in the same room where he was born.

Funeral services will be held at 11:00 a.m. Saturday, October 23, 2021 at the Donnell-Wiegand Funeral Home in Greenville with Matt Mendenhall and Kurt Simon officiating. The family will receive friends from 4 until 7 p.m. Friday at Donnell-Wiegand. For those who desire memorials in Max’s memory may be made to the Greenville First Presbyterian Church or to the Campground Cemetery Association. Interment will follow in Campground Cemetery south of Greenville.

Max Dean Kaegy, the son of Loren E. Kaegy and Edna M. Gaffner Kaegy, was born on May 20, 1935 in his grandparent’s home on the Kaegy farm that Max now owns. He grew up nearby and attended the Dudleyville one room school and graduated from Greenville High School with the class of 1953. Max purchased the Kaegy family farm in 1962. He was a member of the United States Army reserve in Greenville from June 2, 1957 until June 1, 1963 and was a Sgt. when he was discharged. Max joined the Southwestern Electric Co-Op in 1959 where he was staking engineer for 36 years retiring in 1995. He was a founding board member and later president of the Bond-Madison Water Company from 1993 until 2016. Max also served on the Campground Cemetery association for over 50 years. Along with his employment he also farmed the Kaegy farm both grain and hog operations.

Max and Jane-Ellen Jarvis were united in marriage on July 3, 1960 at the Troy Presbyterian Church and she survives. They are the parents of 2 sons who survive: Kevin John Kaegy of south of Greenville and Michael Edward Kaegy and his wife Ann of south of Greenville. Also surviving are five grandchildren: Elizabeth “Beth Ann” Kaegy, Nathan Kaegy (Morgan Lippert), Dustin Swarm and wife Erin, Stephen Swarm and wife Katie, James Kaegy, four great-grandchildren Janelle, Jorma, Juniper, Ellis, and 2 siblings: Sharon Berlin of Modesto, CA, and Dan Kaegy and wife Shirley of Breese, and many nieces and nephews. Max was an avid outdoorsman. He loved to hunt mushrooms, turkeys, and deer, as well as care for his family farm. He also maintained many long term friendships from his graduating class members, to many co-workers, and hunting buddies. He attended all of his sons’ activities as well as grandchildren’s. He enjoyed traveling with Jane and was a devoted and loving husband for 61 years.
Max was preceded in death by his parents Loren and Edna Kaegy.

He, along with his wife Jane, were very active in the Greenville Presbyterian Church for 60 years.

Online condolences may be made at donnellwiegand.com.