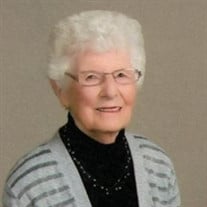 Bernice Ann (nee Walter) Wellen, 97, of Highland, IL peacefully passed away on October 29, 2021, in her home of natural causes with her family by her side.

Bernice had 5 brothers: Cletus, Raymond, Warren, Russell and Melvin. On June 2, 1943, she was united in marriage to Aloysius Wellen of near Pierron, IL at St. Paul Catholic Church. They made their home in Highland, IL. In March of 1946, Al began his business in washer sales and service, and owned and operated laundromats in multiple locations. In a period of over 18 years they had 5 children: Kenneth, Dale, Connie, Gary and Robert.

She kept busy caring for her children, running the household, and supporting the family business. They sold their Maytag sales and service business to son, Dale in 1975. By 1982, all children were out of the house and on their own. In February 1985, they sold their laundromats and retired to enjoy traveling in their RV.

Husband Al passed away on April 30, 2008 just shy of their 65th wedding anniversary. Bernice continued on with her quilting, card playing, tending her flowers, and enjoying her friends, neighbors, and family for another 13 years, reaching the beautiful age of 97. She has seen many changes in her life and told wonderful stories about those experiences. We will all miss her beautiful smile, wit and gracious manner.

A Memorial Funeral Mass will be celebrated at 10:00 a.m. on Saturday, November 6, 2021 at Immaculate Conception Catholic Church, Pierron, IL with Father Piotr Kosk, Parochial Vicar of St. Paul Catholic Church as celebrant. The family will greet those attending the Mass, immediately after the service.