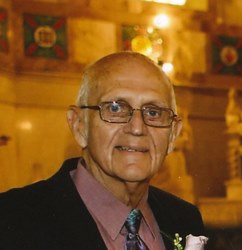 Carl is survived by his wife, Marjorie, nee Peter, Bopp, of Trenton, whom he married on December 27, 1964 at St. John United Church of Christ in Trenton; children, Michelle (partner, Tamara Struessel) Bopp of Denver, CO, Teresa (Jeffrey) VonBokel of Breese, and Corrin (Keith) Short of Imperial, MO; grandchildren, Alex (Brenna), Ryan, Emily, Gregory, and Derek VonBokel all of Breese, and Trent and Samantha Short of Imperial, MO; and sister Betty Martin of Trenton.

Carl was a veteran of the United States Army and later retired from Union Electric, now Ameren, in Alton as a gas fitter after 33 years. He was member of St. John United Church of Christ in Trenton, Trenton’s Sportsman Club, and an honorary member of Tri-County Bass Anglers Fishing Club. He enjoyed his time playing basketball and tennis while in high school, loved fishing, especially at Carlyle Lake, making visits to Colorado, making deer sausage, gardening, and enjoyed spending time with his family, especially watching his kids and grandkids playing sports.

Memorial Service will be Saturday, December 18, 2021 at 12:00 p.m. at St. John United Church of Christ in Trenton with Rev. Christy Eckert officiating. Interment will follow at Trenton Cemetery.

In lieu of flowers, plants, and other gifts, memorials may be made to Hospice of Southern Illinois, St. John United Church of Christ, or a charity of donor’s choice and will be received at the church or by mail to Moss Funeral Home, 105 S. Main Trenton, IL 62293, who is serving the family.