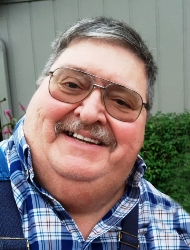 Mr. Baysinger was born in Peoria, Illinois on July 16, 1953, the son of the late Donald and Geneva (DeBoeuf) Baysinger. He graduated from AlWood High School in 1971. On August 2, 1975, Mr. Baysinger married Laura Bell in Woodhull, Illinois and together they enjoyed 46 years of marriage. Gregory worked for Natural Gas Pipeline for 30 years and worked for MedStar Ambulance for 20 years. He was a volunteer fireman for the Huey Ferrin Boulder Fire Protection District, and currently served as a Clement Township official. Bubba had many interests and hobbies, including gardening.

In addition to his wife Laura, Bubba is also survived by his daughters – Amy Culpepper and husband Josh of Troy and Lindsay Baysinger of Beckemeyer; his grandchildren – Katelyn Carpenter, Devin Culpepper, and Reese Culpepper; 2 great grandchildren – Lucy and Beau Carpenter; a sister – Julie Bridgewater and husband Don of Andover, Illinois; a brother – Jerry Baysinger and wife Angela of Nebraska; and many nieces, nephews, relatives, and friends.

Mr. Baysinger was preceded in death by his parents; his mother-and father-in-law – Robert and Janis Bell; a grandson – Mason Culpepper; and a sister-in-law – Kim Bell.

A Celebration of Life will be held at Buxton’s in Beckemeyer on Saturday, December 4, 2021, from 11:00 A.M. – 2:00 P.M. In lieu of other gifts, expressions of sympathy in his memory are suggested to the Clinton County Humane Society or to the Huey Ferrin Boulder Fire Department. Condolence cards and memorial donations will be received through Zieren Funeral Home, PO Box 276, Carlyle, IL 62231.

Online condolences may be shared by visiting www.ZierenFuneralHome.com.