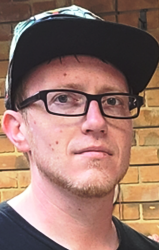 Joshua A. Jones, 34, of Pocahontas, IL, lost his long battle to drug addiction on Friday, November 12, 2021, at the home he shared with his beloved girlfriend Allison Zbinden.

Joshua grew up in Pocahontas with his mom and his brother and best friend, Jesse Jones. He ran around with the neighborhood kids, spent a lot of time with his grandma and reluctantly, played team sports. Josh and his brother spent some weekends and time with their father, who struggled and later lost his life to mental illness and substance abuse. Josh developed a love for classic horror cinematography in his youth, which carried into adulthood.

He started working in the kitchen at Funderburks Grill and Deli at age 17, where the owners, Troy and Tracy, along with his co-workers, would become his extended family over the next 17 years. He had also spent time working for Bass-Mollet Publishing Inc., after graduating from Greenville High School in 2005.

Joshua married Molly Gaffner, and though they later divorced, they brought a beautiful child into this world together, Benjamin Jones. He was also a large part in the upbringing of his step-daughter Cadence Perkins.

Benjamin and Josh shared an incredible, unconditional love for one another and enjoyed their time together immensely; whether they were gaming, skateboarding, playing basketball or enjoying their many pets together, they always wanted to be at one another’s side. He wanted nothing more than to be a good father to his son, to keep their regular contact up and be someone his son could be proud of. For the record, he did just that.

He struggled to get himself out of a very low spot and was able to sustain sobriety for years before relapsing.

He battled anxiety and depression at the same time. Despite what his social media would lead you to believe, anyone who knew Joshua would describe him as gentle, shy and kind. It was his love for his son and his girlfriend, as well as, the support from his family and friends that kept Joshua going for as long as he was able to be here with us.

We wish he could have felt all the love and support that has poured out over the last week. We also hope that if anyone here is experiencing feelings of anxiety, depression, hopelessness or is suffering from addiction, that you reach out to someone and start getting the help you need.

Memorials may be made to the Family, in c/o Sandra Goedecke, to help with his funeral expenses.