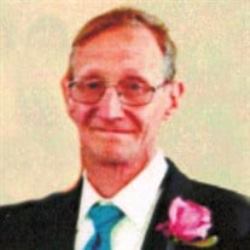 He was born on Sunday, November 21, 1954, in East Saint Louis, IL, the son of Charles and Pearl (nee Stocker) Crouch.

He was a member of: Honorary Member of the St. Jacob Lion’s Club and The American Thrasherman Association.

He was born in E. St. Louis, IL; grew up in Highland on 13th Street since 1960. He graduated from Highland High School in 1973. He worked at Lindendale Park, Freight Salvage, Jakel Manufacturing, and a Tool & Die Company, Caseyville, IL. He was active with the American Thrasherman Assoc, Pinckneyville, IL, during their August – October shows. He did handyman tasks around Highland. He worked at the St. Jacob Lion’s Hall, bingo on Saturday nights and the VFW Fish Frys on Fridays. He enjoyed collecting Lionel trains, woodworking, working puzzles, bowling league at Poplar Junction Bowl and was a St. Louis Cardinal Baseball fan.

Memorial Service at a later date.

Memorial contributions may be made to The American Thrasherman Association or St. Jacob Lion’s Club.