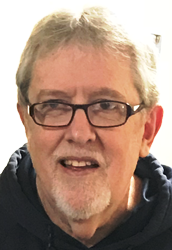 Stephen was born July 21, 1947 in Highland, the son of Jack Ashby and Jessie Aileen (Holdzkom) Compton. He graduated from Greenville High School with the Class of 1964, and went on to earn his Bachelor’s Degree in Education from Greenville College. For the majority of his career, Stephen taught English at the Lena-Winslow Junior High School in Lena. Upon returning to Greenville in 1990, he would work for many more years as a substitute teacher. Stephen was a member of the First Presbyterian Church in Greenville. He was a sports nut, especially enjoying tennis. Stephen was also an avid baseball card collector.

He was preceded in death by his parents; and brother, Kent Compton.

Stephen is survived by his children, Matt (Kim Smithson) Compton of Champaign, Sara (Jayson) Wealti of Evansville, WI, and Emily (Joe) Reed of Hillsboro, OR; and grandchildren, Kai and Harper Wealti, and Jackson Reed.

Cremation rites will be accorded, and no public ceremonies will be held.

Memorial contributions may be made to: Activities Department at Greenville Nursing and Rehab, 400 E Hillview Ave, Greenville, IL 62246.

The family has entrusted Assalley-Young Funeral Home in Greenville with arrangements.

Please visit www.assalleyfuneralhomes.com to share memories of Stephen or offer condolences to his family.