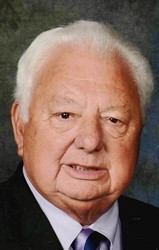 Harold Dean Byers, 86, of Highland, IL, passed away peacefully at home, on Thursday, December 9, 2021, with his wife Nancy at his side.

Harold was born in Folsomville, IN on October 6,1935 to Ella Mae and Harold J. Byers.

During his public service career, he received many accolades for his independence and positive impact on the greater good. He had a generous spirit and lived his life to the fullest, enjoying travel, attending sporting events, and following the horses. He was an avid fan of the Chicago Cubs and enjoyed watching or participating in all sports.

He was preceded in death by his parents; sister, Elaine Grundhoefer; brother, Ronald Byers; and his daughter-in-law, Deborah Byers.

In lieu of flowers, memorials may be made to the Louis Latzer Public Library-Children’s Department or to the Highland Area Christian Service Ministry Food Pantry.