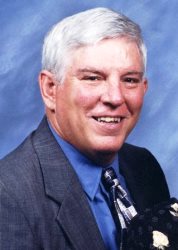 Funeral services will be held at 10:00 A.M. Friday, December 10, 2021 at Donnell-Wiegand Funeral Home in Greenville, IL with Pastor Curtis Flake officiating. Visitation will be held Thursday, December 9, 2021 from 4 to 7 P.M. at the Donnell-Wiiegand Funeral Home. In lieu of flowers, memorials may be made to the First United Methodist Church or Greenville Jr. High Athletics.

James Franklin, the son of William and Elma (Terpening) Huff, was born March 31, 1948 in Alton, IL. He grew up in East Alton, IL, attended the local schools and graduated from East Alton-Wood River High School with the class of 1966. Jim continued his education at Eastern Illinois University where he graduated in 1970 earning a Bachelor of Science degree in Education. He later earned his Master’s Degree at Southern Illinois University at Edwardsville.

Jim and Judith Ann Sandretto were united in marriage on November 7, 1970 at Gillespie United Methodist Church by the Reverend Glenn Creek. They enjoyed nearly 50 years of marriage. They were the parents of daughters Jill Huff of Litchfield, IL and Janet (Erik) Grigg of Greenville, IL. He was the loving Papa to Jessica Grigg of Jefferson CIty, MO, Jenesis (Alex) Newsom of Vandalia, IL and Elyse Grigg of Greenville, IL. Jim was also godfather to Adam Simmonds, Alex Simmonds, and Austin Simmonds.

Jim is survived by his children, grandchildren, brother Joe (Sherry) Huff of Wood River, IL and sister-in-law Dona (Tom) Hubert of Benld, IL as well as 3 nieces, 2 nephews and their families. In addition to his parents, he was preceded in death by his wife, Judy, and daughter, Jodi Lynn, at birth.

Jim began teaching and coaching in Bond County the winter of 1971. He taught History, Social Studies and Physical Education at the Greenville Jr. High for 35 years. He coached Jr. High football, baseball, boys basketball and track at various times for over 22 years. He was instrumental in the naming and prosperity of the James Burke 8th grade Invitational Basketball Tournament. After his retirement he also coached High School Girls Golf for several years and continued to assist the Jr. High athletic teams, keeping the scorebook, running the clock and just passing on his overall knowledge of sports.

Jim was a member of the First United Methodist Church, served on many boards there and taught the Fisherman Sunday School class. He enjoyed cross-stitch, jig-saw puzzles, and had recently taken up coloring to relieve stress and pass the time. He was an avid golfer, Cardinals fan and general sports lover. He enjoyed watching his granddaughters participate in their various activities and talking to anyone about sports that would listen.