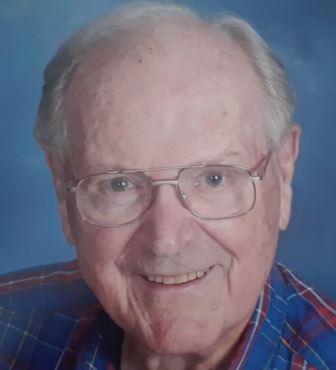 Bud was born October 3, 1933, in Quincy, Illinois to Ellis Eugene and
Cleola (Brock) Bradley. He proudly served our country, in the United
States Navy, from 1956-1962. He married Theresa Herman on June 26,
1999, at the First United Methodist Church in Greenville, Illinois and
they had enjoyed 22 years of marriage.

After a prolonged battle with health issues, almost all members of the
immediate family had been with him in the last hours. He was known
for his avid interest in the Bible and his devotion to his family and
friends. Bud was not afraid to travel and would often drive across
states to lend a hand to one of his grown children. In his later years,
having known loss himself, losing his wife, Debra Bradley, he
volunteered with Hospice to bring comfort and solace to those in
Greenville who were terminally ill. Bud had a wonderful singing voice
and was a true baseball fan. Though later his loyalty was with the St.
Louis Cardinals, he was able to combine these two traits when he was
asked to sing the National Anthem at a Cincinnati Reds game in the

60’s. Bud Bradley was loved by friends and family and will be sorely
missed.

Bud was preceded in death by his parents, Ellis & Cleola and his wife,
Debra.

A celebration of life service will be held at 11:00 am, Wednesday,
December 29, 2021, at the First Christian Church, 1100 Killarney Drive,
Greenville, Illinois, with the Rev. Tyson Graber officiating.

Memorial contributions, in lieu of flowers, plants, and other gifts, may
be given to the First Christian Church, 1100 Killarney Drive, Greenville,
Illinois 62246.