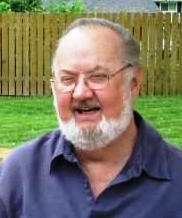 Robert “Bob” Bryan, age 76, of Edwardsville and formerly of Carlyle, died at Anderson Hospital in Maryville on Tuesday, November 30th, 2021.

Bob was born in California on March 28th, 1945, to the late Lowell and Eugena (Davis) Bryan. He married Kathleen Bryk on November 28th, 1970, at St. Mary’s Church in Carlyle.

He was preceded in death by his father, Lowell Bryan; his mother, Eugena York; his mother-and father-in-law, Emil and Virginia Bryk; his brother and sister-in-law, Billy Bryan and wife Sharon.

Bob could often be found working in his garage, whether he was fixing something or just tinkering on little projects. He dedicated much of his time with his family and following their basketball careers. Bob proudly served in the United States Navy aboard the U.S.S. Yorktown during the Vietnam War. He was a member of the Goldsmith Terry VFW Post 3523, Carlyle and the Vietnam Veterans of America. Bob worked in maintenance at Kaskaskia College for 31 years, and after his retirement he worked at the Carlyle Nursing Home for 10 years.

Visitation will be held from 9:00 – 11:00 AM on Monday, December 6, 2021, at St. Mary’s Church in Carlyle. Funeral Mass of Christian Burial will begin at 11:00 A.M. with graveside service at St. Mary’s Cemetery in Carlyle following the mass.

Expressions of Sympathy in memory of Mr. Bryan can be made to his family’s wishes. Condolence cards and memorial donations will be received through Zieren Funeral Home, PO Box 276, Carlyle, IL 62231. Online condolences may be shared by visiting www.ZierenFuneralHome.com.