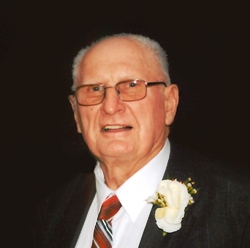 He was born November 8, 1936 in Bartelso, a son of the late William “Bill” and Anna, nee Bergmann, Gerdes.

Bernie was a veteran of the United States Army, was born and raised a farmer, and retired from Illinois Central Gulf Railroad in Centralia. He was a true family man, enjoying time with his wife and children, but above all spending time with his grandchildren and attending all of their sporting events. Bernie enjoyed bowling and rabbit hunting, but mostly loved watching baseball, especially his boys play in the Clinton County League games and following the St. Louis Cardinals.

In lieu of flowers, plants, and other gifts, memorials may be made to St. Cecilia Catholic Church or to the Bartelso Community Development Club and will be received at the church or through Moss Funeral Home, 535 N. 5th, Breese, IL 62230 who is serving the family.