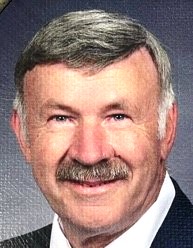 Bob was born July 4, 1942, in Palatine, IL the son of Carl A. and Alma (Kinsey) Lindberg. He obtained his MBA from DePaul University, Chicago, IL. Since 1987, he has worked for Fayco Enterprises, in Vandalia, as their Executive Director and has given a lifetime of service to the field of vocational rehabilitation.

On August 15, 1964, Bob married Colleen S. Attig, the love of his life, in Bartlett, IL. They were married for 57 wonderful years and spent 35 of those years in Greenville. He was a devoted family man who loved to fix things, make wine, and spend time outdoors fishing and enjoying time in the beautiful timbers of Wisconsin. As noted accomplishments, he helped to get several national bills passed that made accessibility ramps mandatory in the United States, he was presented with the Abe Award, in 2013, by the Vandalia Chamber of Commerce for outstanding community service, and was a Son of the American Revolution.

He was preceded in death by his parents and a sister, Evelyn Sawallisch.

Memorial contributions in lieu of flowers, plants, and other gifts, may be made to The St. Lawrence Catholic Church.

The family has entrusted Assalley-Young Funeral Home in Greenville with Ceremonies.