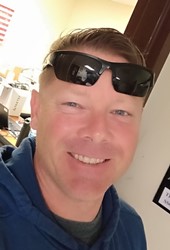 Ed was born July 14, 1971 in Greenville, the son of Larry D. and Ruby (Miller) Wallace. He graduated from Greenville High School with the Class of 1989, and went on to proudly serve our country in the United States Marine Corps. Upon his honorable discharge, Ed earned his bachelor’s degree, and then re-enlisted with the Army National Guard, where he was currently a Training NCO with the rank of Staff Sergeant.

Ed was an avid outdoorsman, whether it be spending time at the beach or fishing, being outdoors is what made him most happy. He was a talented photographer, and he especially enjoyed taking pictures of sea life on his snorkeling trips to exotic locations.

He was preceded in death by his father, Larry D. Wallace; and paternal grandparents, Walter and Bernadine Wallace.

Ed is survived by his mother, Ruby Wallace of Sorento; siblings, Wayne (wife, Cindy) Wallace of Litchfield, Dena (husband, Phillip) Petroline of Sorento, and James Martin of Colorado; his significant other, Kayla Hurst and her son, Reid of Waterloo; and many aunts, uncles, nieces, nephews, and cousins.

Visitation: The family will receive guests from 4:00-7:00 p.m. on Monday, January 17, 2022 at Perfetti-Assalley Funeral Home, 201 S. Main Street, Sorento, IL 62086. The visitation will conclude with full military honors by the United States Army.

Please visit www.assalleyfuneralhomes.com to share memories of Ed, or offer condolences to his family.