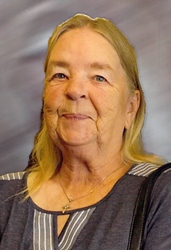 Mary was born September 29, 1951, in Cincinnati, Ohio to the late Elmer J. and Irene Dickhaus. In addition to her parents Mary was preceded in death by two sisters, Patty Dickhaus and Juanita Seibert, and brothers Larry Dickhaus and David Norman.

She married Kim Francis Lobring, CMSgt USAF, Ret., on January 15, 1972, at St. Bonaventure Catholic Church in Cincinnati and he survives in Carlyle.

Mary and her husband lived in many places as he served in the United States Air Force. They lived in Oxon Hill, Md.; Wright-Patterson AFB, Ohio; Hickam AFB, Hawaii; Griffiss AFB, N.Y.; and New Baden, Ill. After living 18 years in New Baden, they moved to Carlyle in 2003 where they enjoyed their retirement years.

Mary was a devoted wife, mother, and grandmother. She loved reading, cooking, gardening, hiking, and traveling. She also loved sports including racquetball, bowling, and golf. In the early 1980s, Mary won the Griffiss AFB women’s racquetball championship. She became the first woman to ever bowl a 700 series at the New Baden American Legion Bowling Alley and Mary and her husband were members of the Twin Oaks Golf Club, Greenville, Ill., until failing health ended their golfing days.

While living in New Baden, Mary worked part-time at Haas Realtors, the Lookingglass Mutual Insurance Company and for RGIS Inventory Services. She also taught CCD (religious education) classes at St. George. In 1987 she accompanied the CCD students on a trip to New Orleans to see Pope John Paul the 2nd.