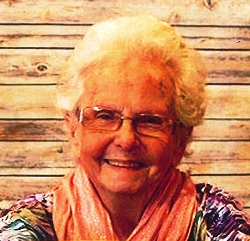 She was born January 3, 1931, daughter of the late Leo and Regina, nee Doerhoff, Hellmann.

Ruth was a member of St. Boniface Catholic Church in Germantown. She was a devoted daughter, wife, mother, grandmother, and great-grandmother. She loved spending time with family and friends, and time with her grandchildren and great-grandchildren was especially cherished. Prior to her marriage she was a telephone operator at the Bartelso switchboard and later worked at the Carlyle Shoe Factory. She was also a farmer’s daughter and loved working on the farm. She enjoyed being a homemaker in a house full of children. After the children were older, she worked at Murray Center in Centralia and then went back to school and received an Associate Degree from Kaskaskia College and worked at the Illinois Public Aid Office in Carlyle. She volunteered for the Pregnancy Crisis Hotline, rarely missed a time to be with the St. Boniface Church quilting ladies, and served cakes to nursing home residents. Besides quilting, her other interests were gardening, camping, playing cards, and attending all of her children’s school activities. Her selflessness, infectious happiness and dedication to all things good was an inspiration to all.

Funeral Mass of Christian Burial will be Tuesday, January 25, 2022 at 1:00 p.m. at St. Boniface Catholic Church in Germantown with Fr. James Buerster presiding. Interment will follow at St. Boniface Cemetery.

In lieu of flowers, plants, and other gifts, memorials may be made to Clinton County Citizens for Life and will be received at the church or by mail, Moss Funeral Home, P.O. Box 117 Germantown, IL 62245, who is serving the family.