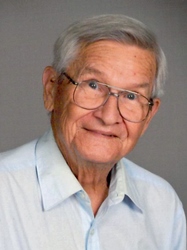 Bill was born on January 20th, 1933, in St. Louis, Missouri, to the late Carol Alexander and Mary Louise (Ruhl) Kelso. He married Carol Lynn Barbeau in Belleville, Illinois on January 1st, 1979. Carol was the love of his life, and he often referred to her as his “forever bride”.

Mr. Kelso was a talented woodworker, and he enjoyed outdoor activities such as fishing and boating. He loved camping and served as a campground host at Hazlet State Park. Bill was a vivid storyteller who had a great sense of humor.

Mr. Kelso worked as an enforcement officer and a meat inspector for the Illinois Department of Agriculture. Bill and his wife, Carol, were proud and active members of the Messiah Lutheran Church. Cpl. Kelso was a veteran of the United States Army and was stationed at Ft. Chaffee in Arkansas from 1953-1955.

A Memorial service will be held at 11:00 A.M. on Friday, January 28, 2022, at Messiah Lutheran Church in Carlyle. Inurnment will follow at Highland Cemetery. Visitation will be held at the church from 9:30 AM until service time. Expressions of sympathy in memory of Mr. Kelso are suggested to Messiah Lutheran Church or to the Clinton County Humane Society. Condolence cards and memorial donations will be received through Zieren Funeral Home, 1111 Clinton Street, Carlyle, IL 62231.