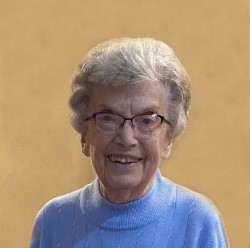 She was born December 20, 1927 in Germantown, a daughter of the late George and Christine, nee Beckmann, Schulte.

Clara was a homemaker and a member of St. Bernard Catholic Church and Altar Sodality in Albers. She enjoyed quilting, playing bingo and cards, cooking, and spoiling her grandchildren with her baking, “no one made it like grandma!”

In lieu of flowers, plants, and other gifts, memorials may be made to TSC Alliance https://give.tscalliance.org/give/268812/#!/donation/checkout or the Alzheimer’s Association www.alz.org and will be received at the visitation or by mail, Moss Funeral Home, PO Box 117, Germantown, IL 62245, who is serving the family.