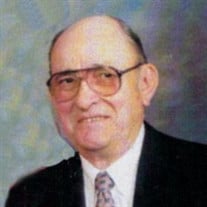 Mr. Louer was born in Valmeyer, IL, where he was baptized and confirmed. He graduated from Valmeyer High School in 1944. He then served in the United States Army from 1945 to 1947, with two different enlistments. In 1948, Herman married Margaret “Maggie” Rippelmeyer. After their children were born, they moved to Missouri. There Herman worked as a senior planner for Emerson Electric, where he was involved with the development of the nosecone for the B-52 bomber. Later he worked for Mound City Tobacco Company, contributing to their success. Following his dream to farm, he and his family moved to rural Highland where he operated a grain and livestock farm until his retirement in the late 1970’s. During his farming, he also worked as the operations manager for Roadway Express in St. Louis. Always active, he enjoyed hunting, trout fishing, and his family. Herman and Maggie traveled extensively in retirement and were philanthropists who supported many area organizations.

Funeral Service will be at 11:00 AM on Saturday, February 12, 2022, at St. John United Church of Christ in Valmeyer, IL, Rev. Steven J. Boorsma, Pastor, officiating.

Interment will be at St. John’s Cemetery in Valmeyer, IL.

Memorial contributions may be made to St. John’s United Church of Christ – Valmeyer or the Shriners Hospitals for Children.