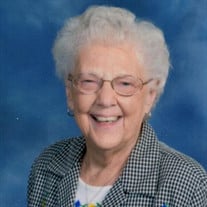 She was born on Thursday, October 09, 1924, in Highland, IL, the daughter of Orville and Leta (nee Pfister) Plocher.

She was a member of United Church of Christ of Marine, UCC of Marine Women’s Guild (2 yrs-President); Highland Historical Society (6 yrs-Secretary & Board of Directors).

She was born in Saline Township, and graduated from Highland High School in 1941. She worked as a secretary for Bond County Farm Bureau, Greenville, IL. During World War II she lived in: Rapid City. SD, working for the Selective Service; Casper, WY, working for the U.S. Rationing Office; Spokane, WA, working for the Palace Dept. Store. Moving back, she worked for Alton Box Board Company, Highland, as the Executive Secretary for sixteen years from 1952 to 1968, later on for Johannes & Marron PC from 1981 to 1986. She taught Sunday School for ten years at the Evangelical United Church of Christ and served two years as the secretary for the Sunday School Teachers. She lived in Marine, IL, from 1968 to 1994, when she moved to Highland. She enjoyed dancing, playing cards, knitting, quilting, making cookies for her grandchildren and great grandchildren.

Funeral Service will be at 10:00 AM on Monday, February 07, 2022, at United Church of Christ of Marine in Marine, IL, with Rev. Philip H. Kershner, Pastor, officiating.

Memorial contributions may be made to United Church of Christ of Marine or Highland Historical Society.