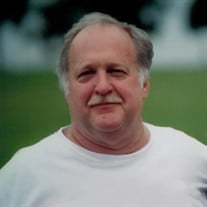 He was a member of Saint Paul Catholic Church, the NRA and AARP.

Michael was born at Highland and grew up on south Pine Street. He was a 1967 graduate of St. Paul High School. After graduation, he worked for Alton Box until he was drafted in 1969. Mike served two years in the US Army, with duty in Korea. After his discharge, he returned to Alton Box where he worked an additional 42 years in machine maintenance, retiring in 2010. He enjoyed watching sports on television, as well as NASCAR. Until he became disabled, he loved fishing, hunting, and coaching Khoury League baseball. Mike was a Corvette fanatic. He was especially fond of his “grand animals” Georgia and Raider (deceased). Mike was a member of St. Paul Church where he was baptized and confirmed. He belonged to Steelworkers Local #1215 and served as president for a number of years. He also maintained membership in NRA and AARP.

Memorial contributions may be made to St. Jude Children’s Research Hospital or Shriners Hospitals for Children.