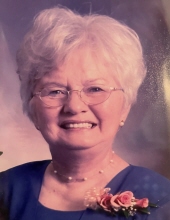 Funeral services will be held 3:00 p.m. Sunday, February 20, 2022, at the Greenville First Presbyterian Church. Visitation will be held at the church from 1:00 p.m. until service time. Mike York will officiate.

December 24, 1928, Patricia and Chester Lee York were united in marriage. They have enjoyed 73 years together. Parents of three sons: Michael York and wife Catherine, Patrick York and wife Rosie, and Steven York and wife Cherie.

Patricia and Chet were deacons at the Greenville First Presbyterian Church. Patricia was an ardent church worker, worked on Greenville Regional Hospital Auxiliary, and a member of the Pierron Club. She loved to sing and play the Piano.

Preceded in death by her parents and siblings Peggy Hineman and Richard Fines.