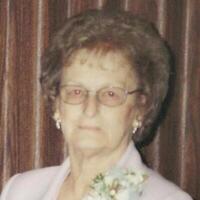 She was born on Monday, August 17, 1931 in Sorento, IL. She was the daughter of Irvin and Helen (Shields) Ulrich.

She was married to Udell I. Hosto on July 22, 1950 at the Immanuel Lutheran Church in New Douglas, IL. Udell preceded Darlene in death on Monday, October 30, 2017. They were married for 67 years.

Darlene was a Postal Worker for 39 years. She worked as the Clerk in Charge at many area post offices including Alhambra 62001, Edwardsville 62025, Livingston 62058, New Douglas 62074, and Worden 62097. Darlene spent the last 10 years of her postal career as the Postmaster for the Walshville Post Office 62091. Darlene attended the Immanuel Lutheran Church in New Douglas, IL.

Darlene is survived by her Daughter: Sheryl (Frank) Vazzi;

She was preceded in death by her Parents; her husband: Udell Hosto; Brother: Jim Ulrich; Sister: Donna Moore; and Sister-in-law: Ruth Kruse

A Public Graveside Service for Darlene Hosto will be held on Wednesday, March 23, 2022 at 11:00 AM at the New Douglas Cemetery in New Douglas, IL with Rev. Dr. Thomas Kratzer officiating.

After her burial at the New Douglas Cemetery, the family will continue the celebration of Darlene’s life with a public luncheon at the Immanuel Lutheran Church Hall in New Douglas, IL.

Memorial Contributions in memory of Darlene Hosto can be made to the Immanuel Lutheran Church, the New Douglas Cemetery at P O Box 6, New Douglas, IL 62074, or to the American Macular Degeneration Foundation.

The Lesicko Funeral Home in Livingston, IL is privileged and to take care of the arrangements and services for Darlene Hosto and her Family.