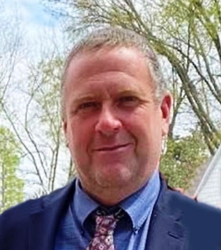 He was born February 7, 1971 in Effingham, a son of Barbara, nee Hartke, Helmink of Teutopolis and the late Joseph Helmink.

Steven began his college studies at Southern Illinois University-Carbondale and graduated in 1995 from the University of Illinois as a Doctor of Veterinary Medicine. Dr. Helmink started his career working with Dr. Garlich in Washington County. In 1997, he went to work for Dr. Greenwald at Veterinary Services in Breese, and on May 1, 1999, Dr. Helmink began his own practice and opened Clinton County Veterinary Services in Breese. On November 1, 2021, he officially went back to his true love and started farming full-time.

Memorial Mass of Christian Burial will be Wednesday, April 6, 2022 at 11:00 a.m. at St. Dominic Catholic Church in Breese with Fr. Patrick Peter celebrating. Following the mass, his cremains will be placed in the columbarium at St. Dominic/St. Augustine Cemetery, Breese.

In lieu of flowers, plants, and other gifts, memorials may be made to the wishes of the family (checks payable to Lisa Helmink), American Heart Association, or St. Dominic Catholic Church and will be received at the visitation or by mail, Moss Funeral Home, 535 N. 5th St. Breese, IL 62230, who is serving the family.