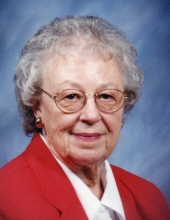 Shirley L. Gaffner (nee Young) age 91 of Greenville, died February 18, 2022 at Carlyle Healthcare Center, where she had been a resident since July 2016.

A Celebration of Shirley’s life will be held at 3 p.m. Sunday May 1, 2022 at the Greenville First United Methodist Church with Rev. Dr. Ward Sussenbach and Rev. Curtis Flake officiating. The family will receive friends there from 1:00 p.m. Sunday until service time. For those who desire memorials in Shirley’s memory may be made to the United Methodist Church or to Greenville University at the service or at The Donnell-Wiegand Funeral Home.

Shirley was the daughter of Benjamin and Emily (Foehner) Young and was born on April 24, 1930 at the family’s home in Highland, IL. She was united in marriage with Eugene (Gene) E. Gaffner and they enjoyed 66 years of marriage before Gene’s passing in May 2015. In addition to her parents and husband, she was preceded in death by a sister, Mitzi Wiesemeyer and daughter-in-law Lori Gaffner. Survivors include three children: Alan Gaffner and Renea (Ed) Barnes of Greenville, IL and Arlin (Marla) Gaffner of Coppell, TX.

Shirley attended public schools in Highland, IL, graduating from Highland High School in 1948. Shortly after graduation, she married Gene on June 27, 1948 in Highland, IL. Gene and Shirley settled on Vine Street in Greenville and lived there until 1968 when they built a house just north of Greenville on Red Ball Trail, where they lived until entering nursing home care.

Shirley excelled as a homemaker. She was an excellent cook, acquiring her mother’s skills in the kitchen. Homemade cakes and pies were plentiful. She canned fruits and vegetable from her garden and made hundreds of jars of black raspberry jelly with berries picked from the wild patch that she nurtured along the timberline near her home. In addition, for many years, she kept the books for Gene’s agricultural product sales and application business with Bond County Farm Service (FS).

Shirley always put her family first. She worried about herself when everyone else had been taken care of. She was there at a moment’s notice to answer the call and help with the grandkids, whether locally or in Oklahoma and Texas.

Shirley’s faith in God was at the center of her being. She believed in the power of prayer and maintained an active prayer life even as her health deteriorated. She was a long-time, active member of the Greenville First United Methodist Church. She taught children’s Sunday School for many years, served as a teacher for the Wednesday after school program and served on numerous committees. She played the piano and enjoyed music of many types, particularly traditional hymns and gospel music.

Shirley was a member of the Hospital Auxiliary and served as a volunteer for many of the organization’s programs and activities.

Special family memories include many trips to St. Louis Cardinal baseball games, first with the family and later with Gene. Shirley always prepared a picnic basket of food to take along and eat before the game. She continued to follow the Redbirds on TV while in retirement home care.

In retirement Gene and Shirley enjoyed traveling and among other places made many trips to Branson, Missouri and wintered for a number of years in Destin and Orlando Florida, where they enjoyed visiting with other Bond County snowbirds. Trips to Florida often included a stop in Nashville, TN to attend The Grand Ole Opry.

Donnell-Wiegand Funeral Home in Greenville is in charge of arrangements.