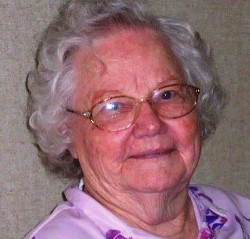 Bessie Inetta Ronat, 99, of Watonga, Oklahoma departed this life on Wednesday, April 27, 2022, at Corn, Oklahoma. She was born December 23, 1922, at Caney, Oklahoma to Henry Duncan and Flora May (Smith) Reeves.

Bessie graduated at Tushka High School with the class of 1941 containing only six students. Bessie served her country during World War II in the U.S. Navy and was honorably discharged in 1946. After the War Bessie enjoyed life and traveled to all the 48 states. She also helped take care of several of her nieces and younger sister Flora. She married Frank Alva Ronat on February 8, 1964 at St. Louis, Missouri. She worked for many years as a computer specialist for the Federal Dept. of Transportation. After she and Frank Both retired from the DOT they made their home in Greenville where they both enjoyed flying together. After they got older, they sold their plane and bought a sailboat that they enjoyed for several years. After Frank passed, she moved to Watonga. Once in Watonga, while she was able, she did some more traveling visiting many of her sisters and brothers and even took a cruise to Alaska. She also enjoyed spending time on the computer spending a lot of time doing genealogy and of course she also loved playing solitaire.

Graveside funeral services with military honors will be announced soon.

A military escort will bring Bessie home from St. Louis Lambert International Airport Monday, May 2, 2022 at 3:00 p.m. Members from various organizations including the St. Louis Airport Police, St. Louis County Police, Patriot Guard, various veterans organizations in Missouri and Illinois to honor Bessie’s service to our country during WWII and one of the few surviving woman who served our country during WWII.