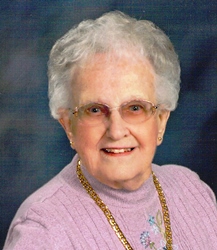 Johanna Katherine Laux of Carlyle passed away peacefully on May 10, 2022, at St. Joseph’s Hospital in Breese, IL. Johanna was ready to go home to our creator.

Johanna and Herb traveled extensively after their retirement. She enjoyed playing cards with her friends, who, unfortunately preceded her in death. She was a wonderful cook and always had large family gatherings at her house. Many looked forward to her fried chicken and cherry or rhubarb custard pies. She was also an experienced seamstress sewing much of her children’s clothing when they were younger, especially her daughter Kathy. She loved quilting and crocheting and made many beautiful quilts and afghans. A mild stroke in 2016 limited her sewing and crocheting abilities, however, she was still able to do embroidery and had enough blocks put aside for 10 more quilts. All her children, grandchildren and great-grandchildren are in possession of some of her quilts. She also loved to read and spent much of her time the past few years doing that and, of course, praying. She daily prayed for many of her family members and acquaintances and was a long-time member of St. Mary Parish in Carlyle.

Expressions of sympathy in memory of Mrs. Laux are suggested to St. Mary’s Church or to the charity of the donor’s choice. Memorials and cards will be received through Zieren Funeral Home, 1111 Clinton Street, Carlyle, IL 62231. www.ZierenFuneralHome.com.