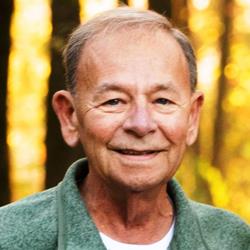 He was born on Wednesday, March 03, 1943, in Highland, IL, the son of Edward and Alvina (nee Steinmann) Kampwerth.

He was a member of Saint Paul Catholic Church.

Kenneth J. “Ken” Kampwerth, 79, of Highland passed away on Thursday, May 5, 2022, surrounded by his family at his home. Ken was born May 3, 1943 in Highland, IL to Edward H. and Alvina C.(nee Steinmann) Kampwerth. He married Donna J. Jackson on April 20, 1968 at St. Paul Catholic Church, Highland. Ken lived in Highland most of his life. He served in the US Army Reserves for 6 years (1964-70). Ken began his career in the railroad industry shortly after graduating from St. Paul High School in 1961. After 42 years of working with several railroad companies, he retired in 2003 at the age of 60.Ken was a Life Member of Highland Council #1580 of the Knights of Columbus and Saint Paul Catholic Church. Ken enjoyed many hobbies over the years. He participated in weekly bowling and horseshoe leagues in the Highland area. As many knew Ken, one of his biggest passions was FISHING. Ken and his family spent many weekends over the years camping at Keyesport , IL fishing on Carlyle Lake and sitting by evening campfires. He followed the stock market on a daily basis. Ken cherished his time with family and spent a lot of time enjoying the activities of his children while they were young. From coaching youth sports to sitting on the sidelines ; he was always there to support his children. He also followed the many activities of his grandchildren and great-grandchildren – hockey, dance, baseball, et al. Upon his retirement from the railroad industry, Ken spent his summers at Kentucky Lake. One f the things he was most proud of was the house that he and Donna built near Kentucky Lake at Hardin, KY.[Their address was on FBI DriveFarm Boys from Illinois]. Fishing and gardening kept him busy almost every day. At the end of the day, he enjoyed nothing more that a good vodka martini. In addition to his parents, he was preceded by his father-in-law-Wilbur Jackson; niece-Michelle Kampwerth, brothers-in-law-Timothy Jackson & Darwin Voigt and sister-in-law-Susan Kampwerth

Private Interment will be Saturday, May 14, 2022, at Saint Joseph Catholic Cemetery in Highland, IL.

Memorial contributions may be made to St. Jude Children’s Research Hospital; Shriners Hospital for Children; Unity Hospice and Palliative Care.