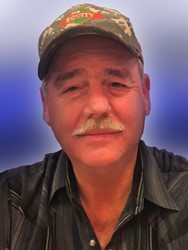 Robert “Bob” James Johnson of rural Greenville passed away on April 28, 2022, at the age of 58, following a hospitalization in Columbia, Missouri. Bob was a devoted son, brother, father, and grandfather who worked hard and gave time and talent towards the things that he felt made life better for his family and his community.

He is remembered as a devoted father by his children, always lending a hand to help them or an ear to listen when they needed someone to lean on. He filled his life with family, friends and community that he loved dearly, and should be remembered as a hardworking and dependable man who was kind and caring. He was a gifted mechanic and was always willing to help anyone with a repair or a project. He liked to pitch in and help where he could, no matter if it was standing at the grill during a cookout or with a tool in his hand doing some extra work for a friend or neighbor. He had a great sense of humor and a big laugh and smile that could fill a room, and all of that will be missed by all who knew him.

Bob was born on August 17, 1963, in Pana, to Robert Lee and Nancy Irene (Stone) Johnson. He was raised on the farm near Mulberry Grove, where he grew up helping his family work the land and developed a deep appreciation for agriculture. He was active in 4-H and FFA and enjoyed raising and showing dairy cattle under the Johnson Melody Farms name throughout his lifetime.

He attended school at Mulberry Grove and graduated high school in 1981 before attending ITT Bailey Technical School in St. Louis. Bob returned home where he worked as a foreman for the Bond County Highway Department and farmed alongside his family.

Bob volunteered his time to causes that he felt made a big impact in his life and in the community. He was a Bond County 4-H leader, giving countless hours to support the Dudleyville 4-H Club, along with helping support local FFA programs. Bob was always found helping with cookouts, fundraisers and projects that benefited 4-H and FFA youth in the county. He also enjoyed antique farm equipment, especially old John Deere tractors.

He is survived by his parents, and his siblings Dianna (David) Freeman of Greenville and Steven Johnson of Herrick. Bob was close with his nieces and nephews and their families, all of whom survive him and will miss him.

A visitation for Robert “Bob” James Johnson will be at Donnell-Wiegand Funeral Home in Greenville, on Thursday May 5, from 4pm to 7pm. Graveside services will be held Friday.