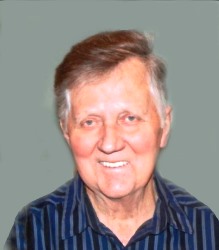 He was born August 7, 1936 in Germantown, a son of the late Lawrence and Frances, nee Boeckmann, Beckmann.

In addition to his parents, he was preceded in death by his wife Marilyn, nee Kohrmann, Beckmann, whom he married September 7, 1959 at St. Boniface Catholic Church in Germantown and who died May 7, 2014; brothers, Paul

Virgil was a veteran of the United States Army. He was a dairy farmer in his younger years, formerly worked in bookkeeping for Hunter Packing in E. St. Louis, then worked in maintenance and as a bus driver for Mater Dei Catholic High School in Breese. Virgil was a very devoted husband to his wife Marilyn and he cherished his time spent with his family.

He was a member of St. Boniface Catholic Church in Germantown and the Germantown American Legion Post 325.

In lieu of flowers, plants, and other gifts, memorials may be made to Mater Dei Catholic High School and will be received at the visitation or by mail, Moss Funeral Home, PO Box 117, Germantown, IL 62245, who is serving the family.