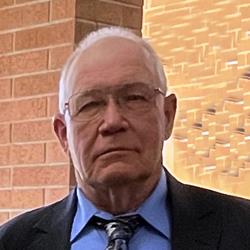 On Friday, February 14, 1975, he married Trudy A. Mollet nee Neudecker at Evangelical United Church of Christ-Highland, IL, who survives.

He was born in Highland, IL; grew up on the family farm. From the age of 5 years old he helped his father on the farm until he entered the US Army. He was a 1965 graduate of Triad High School and from Advanced Technical School. He then worked from 1963 to 1965 for the Marine Township and from 1965 to 1967 he worked for Basler Electric. He served in the US Army, from 1967 to 1969, active duty during the Vietnam War, stationed in Bamberg, Germany, as a Master Mechanic and was a E-5. In 1969 he became owner of the family farm, farming grain and livestock, up until he passed away. He enjoyed shooting trap with his grandchildren, time with family and friends and reminiscing the days gone by at the annual bonfires and family reunions. He raised beef, enjoyed butchering, making summer sausage and was a true John Deere person.

Funeral Service will be at 11:00 AM on Thursday, May 19, 2022, at Evangelical United Church of Christ in Highland, IL, with Rev. Todd Bean, Transitional Minister, officiating.

Memorial contributions may be made In Lieu of Flowers to the Lee Iten Post 439-American Legion; Shriners Hospital for Children, Warrior Farms, or Wounded Warriors.