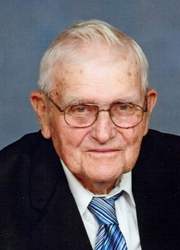 Edward “Eddie” H. Holthaus, age 89, of rural Beckemeyer, passed away on Monday, June 27th, 2022, at his home surrounded by his loving family. He was born on October 1, 1932, in Breese, Illinois, the son of Louis and Celia (Kampwerth) Holthaus. On October 22, 1958, he married Edna Krebs at St. Mary’s Church in Carlyle, Illinois.

Edward served as a paratrooper in the famed 11th Airborne Division of the United States Army from 1954 to 1956. He was honorably discharged on February 28th, 1962. He was a life-long farmer and was also a welder. After retiring from farming, he enjoyed selling produce from his vast and bountiful garden, and eggs. Edward also spent time in his shed fabricating things with his welder, but most of all he loved spending time with his loving family.

Expressions of sympathy in memory of Mr. Holthaus are suggested to St. Anthony’s Church, for Masses, or to the Beckemeyer American Legion. Donations will be received through Zieren Funeral Home, 1111 Clinton Street, Carlyle, IL 62231. Online condolences may be shared at www.ZierenFuneralHome.com.