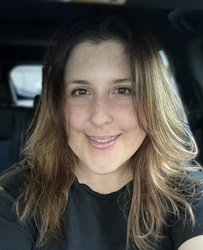 Krissa Suzanne Dudley, beloved daughter, friend and colleague whose zest for life was matched only by her deep love for and devotion to her family and many friends, passed away unexpectedly June 26, 2022, at her home in Naperville, Illinois. She was 41.

Born Jan. 17, 1981, in Olney, Illinois, she was the beloved only child of George and Susan Dudley. She grew up in Carlyle, Illinois, attending the local grade, junior high and high schools before graduating in 1999. She attended Kaskaskia College before moving on to Southern Illinois University at Carbondale and finally Murray State University (MSU) in Murray, Kentucky, where she was a sister of Alpha Delta Pi Sorority, member of the American Chemical Society and easily made friends with anyone fortunate enough to cross her path.

Following her graduation from MSU, Krissa was recruited by Caterpillar, Inc., where she spent more than a decade of her career, beginning as safety professional and industrial hygienist and moving up through the corporate world to become a Six Sigma Black Belt. Her project portfolio included improvement initiatives for safety, quality, efficiency, process standardization, professional development and cost control. She led projects in the U.S., Canada and Belgium.

While employed at Caterpillar, Krissa completed her master of business administration at Oklahoma State University in 2014. Following her tenure at Caterpillar, she served as a quality and continuous improvement leader at Owens Corning in Atlanta, Georgia, before moving on to Parker Hannifin. There she served as a division lean manager in Lexington, Kentucky, before becoming a business unit manager at the company’s facility in Woodridge, Illinois. Most recently, she led a team of 250-plus members in achieving $42 million in annual sales as a Tier 1 and Tier 2 automotive supplier while subsequently completing a post-graduate certificate in data science and business analytics from McCombs School of Business at The University of Texas at Austin.

Krissa was the consummate professional, highly valued by her employers and employees and admired by women and men alike for her outstanding ethics and business acumen. She was a role model for many who crossed her path, and went out of her way to support and mentor other women, especially those pursuing careers in the fields of business and science.

But while Krissa enjoyed and valued her professional career, it was her personal life that meant the most to her. She valued her family and friends above all else. Krissa was known for her fantastic sense of humor and wit, and was the life of the party. She was a fiercely loyal friend, a beloved and valued colleague, a steadfast supporter of women, an advocate for society’s most vulnerable and a deeply loving and devoted daughter, granddaughter, niece and cousin. She was someone who lived life to the fullest and took full advantage of the great many things it had to offer – music, food, shopping, travel (throughout the U.S. and in Europe), movies, evenings on the town and time spent with those she cherished most. While her life ended far too soon, she enjoyed more personal and professional achievements in 41 years than most people could ever hope to squeeze out of a lifetime. She will be deeply missed by her family and friends, but she will never be forgotten.

A Funeral service will be held at 11:00 AM on Saturday, July 2, 2022, at Zieren Funeral Home in Carlyle with Rev. Steve Barrett, officiating. Interment will follow at Carlyle Township Cemetery. Visitation will be held at Zieren Funeral Home in Carlyle on Friday, July 1, 2022, from 4:00 – 8:00 PM, and on Saturday, July 2, 2022, from 9:00 – 11:00 AM. Memorials may be made to the Krissa S. Dudley Memorial Fund, a fund in Krissa’s memory benefiting women pursuing careers in business and science. Donations will be received at the funeral home and can be payable to Susan Dudley. Online condolences may be shared at www.ZierenFuneralHome.com.