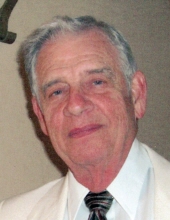 Eldon Smith, age 91, of Greenville passed away in the ER at HSHS Holy Family Greenville, Monday August 1st, 2022. He was making plans to continue with his busy life when he was unexpectedly taken. Eldon was an avid gardener, and woodworker, and loved his little farm, which he and his wife had transformed throughout their retirement years. Many special animals had found a happy home at the farm, including his buddies Oreo, and SuLin.

Eldon was born June 17, 1931 to John and Ethel (Leidner) Smith in Greenville. He attended Greenville schools, graduating in 1949. He worked for Clements Market as a young teen and entered the United States Army during the Korean War, in 1952. He started his army career with Signal School, receiving training on installation and repair of radios in all types of army vehicles in Korea and, ending with working on microwave towers in Japan. Of interest is that he and a close friend had the most assignments in the most locations during their service years. He was honorably discharged January 1954 and was married to his wife of 68 years, Helen M Richardson, 10 days later.

He was excited to be going on an Honor Flight in September.

Eldon owned and spent his working years at Millersburg Store supplying many farmers and farm families with groceries, farm supplies, feed, fertilizer, and chemicals. He retired in 1989 and enjoyed every part of retirement at his own farm. He created a haven for his grandchildren to play in the woods, go fishing, explore his tools and barn, and most recently teaching his great granddaughter beginning gardening, feeding chickens, and gathering eggs.

Surviving Eldon is his wife, Helen and his only daughter, Susan Kelley of Greenville. Also surviving are his three grandsons, Patrick (Amy Pressnall), Jay, Evan (Hannah Lucco), great granddaughter, Hazel Grace Kelley, and Luke Donald Bradley. He was an amazing and loving Grandpa. Also surviving is his brother Donald E Smith (Ruth Blankenship) of Vandalia, brother-in-law, Gene Richardson, and neices and nephews. He was preceded in death by his parents, John and Ethel Smith and son-in-law, Donald Kelley, sister-in-law, JoAnn Reymond, and brother-in-law, Charles Richardson.

Visitation will be Saturday, August 6th from 11:00am-12:45pm, with funeral service to follow at the Greenville First Christian Church with Darryl Bolen officiating at 1:00 pm. Burial will be private.

In lieu of flowers and gifts, the Myotonic Muscular Dystrophy Association is the designated memorial, specifically for research and treatment development. Gifts may be made at the services, or by mail to Donnell-Wiegand Funeral Home, at 203 West Oak St., Greenville, IL 62246. Donnell- Wiegand Funeral Home is in charge of arrangements. Condolences may be made online for the family at donnellwiegand.com.