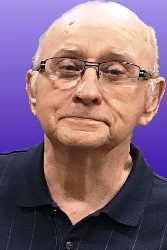 He lived in the Lebanon area for 17 years before moving to Kentucky for eight years. He and Carol then came back to Illinois, making a home in Breese.

During their time in Lebanon, Dale was a member of St. Joseph Catholic Church. Dale had earned his Masters’ Degree and taught Social Sciences at Mascoutah High School from 1967 to 1993; a member of the Teacher’s Union in Mascoutah. After retirement, he worked there as a substitute teacher for another 10 years. He was the head wrestling coach, head baseball coach, and the assistant football coach at Mascoutah High School.

Dale was a lifelong Cubs fan, and always enjoyed watching his kids and grandkids play sports. He liked to fish, camp, and was an avid birdwatcher, with white pelicans being his favorite. Dale loved decorating for the Holidays, making Halloween and Christmas decorations; even winning the Tiny Tim Category one year in the Breese Holiday Lighting contest. He also loved to make water fountains as well. He enjoyed traveling with his wife, when she was able, with Alaska being his favorite destination. Dale enjoyed surfing the internet and passing on good deals. Always wanting to learn new things, he would look up any topic he found interesting on the internet until he figured it out. A loving, family man, Dale spent the last few years taking care of his wife.

Memorials may be made to St. Jude Children’s Hospital, Hospice of So. IL., or Mater Dei Catholic High School.