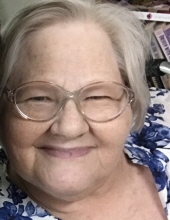 There will be a graveside service for Nadine Kimbro Ford at Liberty Cemetery at 2:00 p.m. Friday, September 9, 2022 with Rev. Dr. Ward Sussenbach officiating. The Donnell-Wiegand Funeral Home in Greenville is in charge of arrangements.

Born, Ina Nadine Kimbro, known as Nadine Kimbro Ford, the daughter of George Lamoyne Kimbro and Lucille Elizabeth Watkins Kimbro, was born on Monday, July 4, 1949 near Greenville, Illinois. Nadine grew up in Greenville on the Red Ball Trail, and attended the Greenville Public Schools. Nadine moved to Granite City when she was age 15 where she started her family and Ina B. Ford her daughter was born there. Then Nadine went on to live in Stewart County, TN, Nashville, TN, Miami , Florida, and later moved to Pana, Illinois on Christmas day over three years ago.

Nadine was a homemaker for her family. She was known as Meemaw by her grandchildren and all of the neighborhood kids. She was a devoted Christian who enjoyed sewing , watching her television programs, and reading her bible.