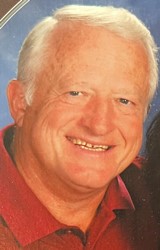 Keeping his wishes, there will be a private family service. Memorials in his memory can be made to the Greenville Free Methodist Church or Durley Camp. Donnell-Wiegand Funeral Home is in charge of arrangements.

John Paul, the son of Paul W. and Marjorie Anne (Calvert) Reed, was born December 22nd, 1946, in Lawrenceville, Illinois. Because his father was a minister, they lived in several locations, settling in Lawrenceville where he attended public schools from 6 th grade through high school, graduating in 1965.

John earned a Bachelor’s Degree in Secondary Education from Greenville College in 1969 and a master’s degree from SIUE. He taught English and coached Jr. High boys’ basketball for 35 years, the first sixteen at Keyesport School, finishing his career at Carlyle Jr. High School. One coaching highlight, he led his team to win a state championship, earning him “Southern Illinois Coach of the Year.”

John and Jennifer Jane (Apple) were united in marriage on August 3rd, 1968, in Lawrenceville. They enjoyed over 54 years together. John is also survived by son, Jonathan Reed of St. Louis (married to Gloria), daughter Melissa “Mel” Reed of St. Louis, and grandchildren, Jack, Benjamin, and Olivia.

John was the oldest of three siblings. He is survived by sister, Judith Diver of Greenville (married to Tom) and Richard Reed of Midlothian, Texas (married to Bonnie).

John was a faithful member of the Greenville Free Methodist Church. He enjoyed golfing, watching St. Louis sports, and most of all, being with his family and playing with his grandkids.