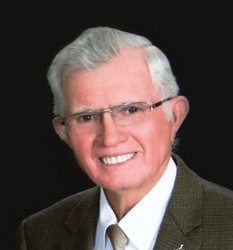 He was born October 13, 1931 in St. Rose, a son of the late Elizabeth, nee Tebbe, and Joseph F. Fischer, Sr.In addition to his parents, he was preceded in death by his son-in-law, Kenneth Benhoff; siblings, Charles Fischer, John Fischer, Mary Goestenkors and Sr. Bertha Fischer, ASC; father-in-law and mother-in-law, John and Irene, nee Kohlbrecher, Grapperhaus; and brothers-in-law and sisters-in-law, Clarence Schumacher,

Joe was a veteran of the United States Army and served in the Korean War. He was a member of St. Rose Catholic Church, Men’s Sodality and Choir, St. Rose Development Club where he was a past President, Breese Knights of Columbus Council 2869, Breese American Legion Post 252, Clinton County Farm Bureau, and former Mater Dei High School Board Member. He worked as a mechanic for Weisenfeld Bros. in Breese and in 1967, he along with his wife Mary Lou, took over the family farm. Joe enjoyed playing cards, dancing, traveling, and spending time with family and friends.

The Breese American Legion will hold services Thursday at 6:00 p.m. followed by the Breese Knights of Columbus at 6:30 p.m.

In lieu of flowers, plants, and other gifts, memorials may be made to St. Rose Catholic Church or Mater Dei Catholic High School and will be received at the visitation or by mail, Moss Funeral Home, 535 N. 5th St. Breese, IL 62230, who is serving the family.