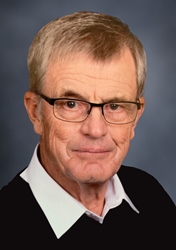 Mr. Lange was born on February 7, 1943, to the late Fred and Leona (Lueking) Lange. He married Earlene (Twenhafel) Lange on June 6th, 1964, at the Trinity Lutheran Church in Hoffman, Illinois.

Melvin worked as a truck driver for Centralia Cartage, ATL Trucking, and ANR Fright. He served in the United States Army Reserves and was a devoted member of Bethlehem Lutheran Church in Ferrin.

Mr. Lange is survived by his wife, Earlene Lange of Centralia; his children, Bruce Lange of Indianapolis, Melissa Winkeler (Dale) of Shattuc, Dennis Lange of Centralia, and Michael Lange (Geonesa) of Shattuc; his grandchildren, Zachary, Dominic, Danielle, Drew, and Emma; his brother, Verlin Lange; and his sisters-in-law, Dorothy Lange and Doris Simpson; and several nieces and nephews.

Mr. Lange was preceded in death by his parents, Fred and Leona Lange; his brothers, Harlan Lange and his wife Wilma, and LeRoy Lange; and a brother-in-law, Charles Simpson.

A funeral service for Mr. Lange will be held at 11:00 A.M. on Monday, September 12, 2022, at Bethlehem Lutheran Church in Ferrin, Illinois, with Pastor Jonathan Jennings, presiding. Interment to follow at Hillcrest Cemetery in Centralia, Illinois.

Expressions of sympathy in memory of Mr. Lange can be made to the charity of the donor’s choice. Memorial donations will be received through Zieren Funeral Home, 1111 Clinton Street, Carlyle, IL 62231.

Online condolences may be shared at www.ZierenFuneralHome.com.