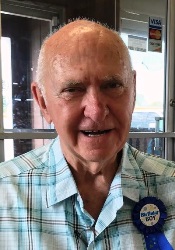 Born May 6, 1943, in Rochester, IL, son of Lester Ray, Sr. and Helen Sexton Funderburk. From age 1 lived in rural Edinburg attending Edinburg schools through his junior year, then graduating from Greenville High School, Greenville IL. Bob attended Greenville College and Kaskaskia College. He began his food service career working at the Bel Air Restaurant in Greenville, IL, and later working for food service management companies as a hospital food manager. In 1970, Bob leased the Hi De Ho Restaurant in Carlyle, IL, purchasing it three years later along with the motel. He later added a banquet room and new motel rooms as well as an off premise catering service. He operated the Hi De Ho business until selling it in 1987.

Bob was most proud of his children and all of their accomplishments.

In lieu of flowers, memorial donations in Bob’s name can be made to the First Christian Church of Greenville and will be received at the visitation or by mail, 1100 Killarney Drive, Greenville, Illinois 62246.

Friends may register online at www.KalmerMemorialServices.com. Kalmer Memorial Services in Lebanon is in charge of arrangements.