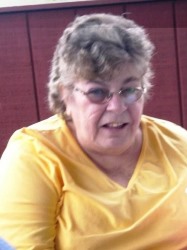 She was born November 5, 1948 in Highland, a daughter of the late Harvey and Dolores, nee Warnecke, Knebel.

In addition to her parents, she was preceded in death by her husband, Harold B. “Yogi” Albers, whom she married April 5, 1974 at Immaculate Conception Catholic Church in Pierron and who died December 5, 2019; brother, Mike “Moocho” Knebel; father-in-law and mother-in-law, Herman and Catherine, nee Frohn, Albers; and brothers-in-law and sister-in-law, Robert Albers (in infancy), Jerald Albers, Bev Albers, Franklin Eversgerd, Leroy Eversgerd, and August Kahrhoff.

Ruthie was a member of St. Boniface Catholic Church in Germantown and worked as a dairy farmer. She enjoyed playing cards, going to the casino, quilting, and making chocolate chip cookies.

Funeral Mass of Christian Burial will be Thursday, September 22, 2022 at 10:00 a.m. at St. Boniface Catholic Church in Germantown with Fr. James Buerster presiding. Interment will follow at St. Boniface Cemetery.

In lieu of flowers, plants, and other gifts, memorials may be made to the Clinton Manor Activity Fund and will be received at the visitation or by mail, Moss Funeral Home, 535 N. 5th St. Breese, IL 62230, who is serving the family.