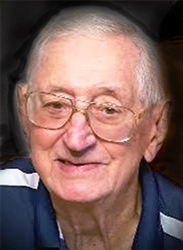 Bernard G. Heiligenstein, 93 of Carlyle, passed away on Monday, October 3, 2022, at Trenton Village in Trenton, Illinois.

Barney’s wit and wisdom allowed him to tell tales about the remarkable life he lived. While attending Southern Illinois University in Carbondale, he pitched for the Salukis baseball team. After a stint in the minor leagues, he joined the United States Air Force. Captain Heiligenstein went on to be a flight instructor during the Korean War. Barney graduated from St. Louis University School of Law and worked as an attorney in Carlyle for over 50 years. He served on the Mater Dei High School board and was instrumental in creating the Mater Dei Foundation. He also served as a volunteer fireman and later trustee for the Carlyle Fire Protection District. Mr. Heiligenstein was a member of St. Mary Church in Carlyle and Carlyle Knights of Columbus Council 1382. He had many hobbies and interests, including hunting and fishing, golfing, and following Mater Dei High School sports.

Expressions of sympathy in memory of Mr. Heiligenstein are suggested to the Mater Dei Foundation. Donations will be received through Zieren Funeral Home, 1111 Clinton Street, Carlyle, IL 62231.